Gadadhara Pandit Dasa, the first ever Hindu Chaplain for Columbia University and New York University, compared The Matrix, a 1999 film about a man who discovers that he is living in a computer program, with Bhagavad Gita, a foundational sacred Hindu text. 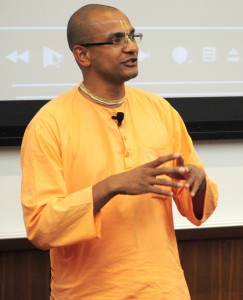 Dean of Religious Life Varun Soni opened the event in the Tutor Campus Center on Tuesday, which was hosted by USC’s Office of Religious Life and the Levan Institute for Humanities and Ethics, with a brief introduction of The Matrix, one of the most overtly philosophical films to ever come out of Hollywood. He explained that Neo, the film’s protagonist, represents the “liberated one.”

The talk included a combination of clips from the film followed by discussions.

Pandit connected Hindu theology with Neo’s belief that there is something missing in the world and the film’s depiction of characters entering the alternate reality through sleep.

“Within the Hindu tradition, it is understood that we are partially asleep,” Pandit said. “There’s a certain part of us that’s actually still asleep. The goal of human life is to wake up out of that slumber. Somehow, we’re not conscious of everything that’s going on.”

Pandit also focused on the dialogue between Neo and another character, Trinity. He emphasized Trinity’s remarks to Neo that “it’s the question that drives us,” and “it’ll find you if you want it to.”

Students answered with questions such as, “what is my purpose,” “what is love” and “what makes the struggle worth it?”

Pandit also made a direct comparison between the struggles of Neo and Arjuna, a character in the Bhagavad Gita, who has a panic attack and is unable to undertake the duty he has been waiting to perform for 13 years. His dilemma is whether to fight or not fight in a battle. Pandit said humans must first have a high degree of self-awareness before making choices to act.

Pandit also said that oftentimes, humans give up because they think these questions are beyond understanding, but claimed that answers always exist.

“If we really want the answer, it’ll find its way into our life, but we have to be looking for it,” Pandit said.

Divakar Singamsetty, a junior majoring in mechanical engineering, said she found his presentation to illuminate religious undertones within the film.

“Gadadhara Pandit’s connections between the Bhagavad Gita and The Matrix, and the hidden spiritual aspects of the film were very intriguing,” Singamsetty said.