Hindu Temple Attacked in Pakistan: A Story of Minority Persecution

Hindu Temple Attacked in Pakistan: A Story of Minority Persecution

While the pseudo-seculars and bleeding-heart-liberals in India can be heard yelling non-stop at the top of their lungs about the rights of minorities, specifically Muslims but when it comes to the persecution of Hindu Minority in Pakistan, these self-appointed guardians of human rights and humanity retreat into oblivion. Not a whisper of protest, let alone agitation, will be heard from these fragile and tender souls.

The story of Hindus in Pakistan is one of a perennial, brutal nightmare which can be reflected in the receding percentage of the community that shrank from 22% in 1947 to a meagre 1.2% of the total population of the Islamic state in 2011. Accompanying this sagging numbers were forceful conversions, rapes of Hindu women, barbaric treatment at the hands of law authorities and regular riots.

Another feature of the dreadful Hindu life in Pakistan is the desecration of their temples and religious shrines. This Saturday another Hindu temple came under attack by an irate mob of dozens of Muslims who set the temple ablaze in Larkana, the hometown of Bilawal Bhutto, over the alleged desecration of Islamic holy book Quran.

The incident took place late at night when local Muslims alleged that Sangeet Kumar, 42, a member of Hindu community, had ripped the pages from Quran. A huge swathe of angry students from Islamic seminaries, wielding batons, attacked the temple, tearing down statues of Hindu gods and goddesses and set fire to the sanctuary in the temple.

“Our Dharamshala has been gutted and the temple has been partially damaged. All the statues have been destroyed by the vandals,” Kalpana Devi, chairperson of the Local Hindu committee, told Reuters. The fires of communal trouble quickly spread to other parts of Pakistan too, with a crowd of Muslim protestors setting the shops of Hindus ablaze in the city of Osma Mohammad and Dera Murad Jamali. 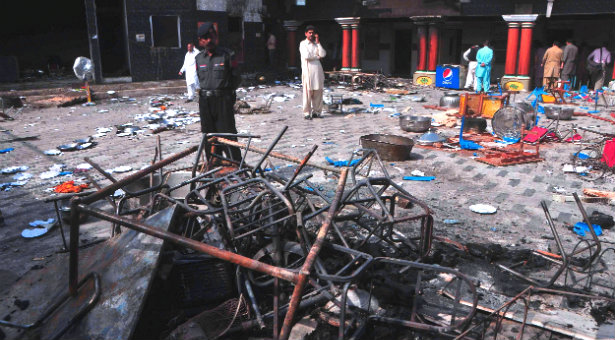 Although heavy deployment of police was visible in the towns and two Muslim youth were arrested, the fact remains that life is precarious for the members of Hindu community in India’s Islamic neighbor. Minorities are a soft target for fanatics owing to the draconian Islamic law of blasphemy which mandates strictest punishment, including death penalty, against anyone who says anything against majority religion. Pakistan, along with a number of other Islamic nations, have the worst human rights record as well as low level of tolerance for those who are not part of the majority.

I consider attack on temple akin to attack on GKB.perpetrators will b brought 2 justice as will people who spread lies and incited violence

Mr Zardari, akin to Indian politicians, is paying a lip-service to the concerns of Hindus in Pakistan, but his government, as did his predecessors’, has failed to recognize, let alone seriously address and tackle, the grave threat posed to minorities’ rights and existence by Islamic fanatics.

The irony of the situation is that Indian political parties – both Congress and BJP – have failed to take up the cause of Hindu minority in Pakistan. It’s a crying shame that Pakistani Hindus have no safety net to fall back on neither in Pakistan nor in India.