Offence against any religion comes under blasphemy law: CJ

Offence against any religion comes under blasphemy law: CJ 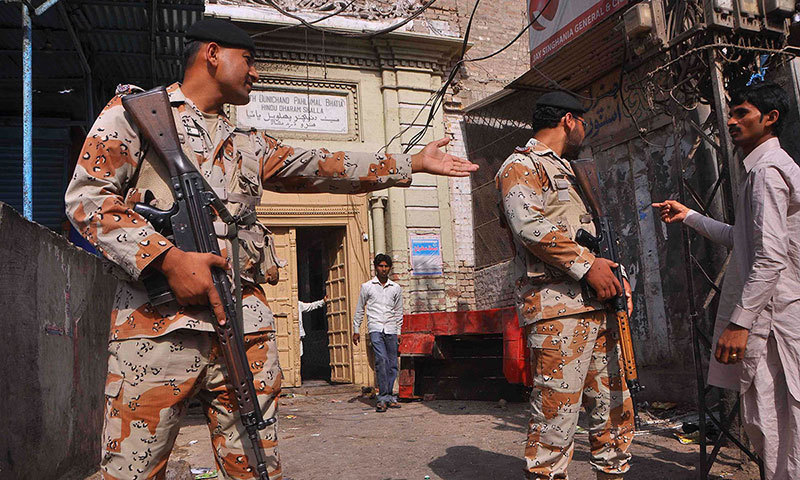 Paramilitary soldiers stand guard outside a temple that was attacked in Larkana, Sindh. — Photo by Reuters/File

ISLAMABAD: Chief Justice of Pakistan Tassaduq Hussain Jillani on Tuesday remarked that according to Pakistan Penal Code’s Article 295, offence against any religion comes under the blasphemy law while expressing annoyance for non-registration of cases against culprits involved in setting Hindu temples ablaze in Sindh.

He expressed these remarks while chairing a three-member bench in a suo motu case over Peshawar Church bombing and rights of minorities.

The chief justice announced that due to importance of the case, the court would appoint amicus curiae including Munir A. Malik, Khawaja Haris and Hassan Aurangzaib who would assist the court in the matter without charging any fee.

He also directed the minorities representatives to submit a report which indicates sections where the material has been used to abuse the minorities and identify areas where law enforcing agencies failed to secure their lives and property.

Justice Jillani said that the court would share grievances of the minorities, hinting establishment of a new force to safeguard the minority communities.

Pakistan Muslim League-Nawaz (PML-N) MNA Dr Ramesh Kumar apprised the court that during last two months six untoward incidents happened with the Hindu community where their temples were set ablaze and their religion was not properly honoured and miscreants were not brought to book.

He said that four of the incidents come under the blasphemy law.

Additional Inspector General (AIG) Sindh Police Ali Sher Jhakrani informed the court that the police has arrested five suspected criminals involved in torturing people belonging to minorities but cases were not registered under the blasphemy law.

The chief justice directed him to submit a detailed report over the action taken by police in this context within a week.

The court also directed Advocate General Khyber Pakhtunkhwa to submit a detailed report over the Hindu samadhi in Karak district.

Salim Michael, a member of Justice Helpline informed the court that Young Man Christian Association is a prestigious institution based in Karachi. He complained that the building was being misused by some people and the matter was subjudice in the Sindh High Court (SHC) for a while.

He said the SHC had appointed a ‘Nazir’ – a court official who serves processes, acts as treasurer, and performs other similar duties – to look after the affairs of the club till final decision.

Dr Ramesh Kumar apprised the court that according to the Liaqat-Nehru pact, the chairman of the evacuee property trust should be a Hindu.

On this, the chief justice remarked that the political situation among the two nations was not good so that the accord was not implemented on both sides but the apex court is trying to facilitate them on humanitarian grounds.

During the hearing, the chief justice also hailed the role of Indian Supreme Court for the welfare of minorities in India.

Later, the court adjourned the hearing for one week.