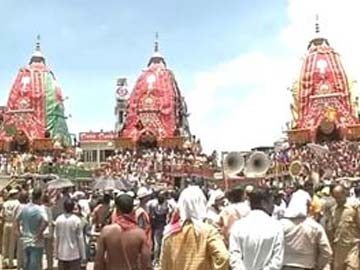 Bhubaneswar:  Ahead of the ensuing annual Rath Yatra festival, the Jagannath Temple managing committee today asked the Odisha government to stop the practice of devotees climbing atop chariots and touching the Lord.

Puri King Gajapati King Divyasingha Deb, who headed the committee, said this while presiding over a meeting of religious heads who supported Puri Shankaracharya Nischalananda Saraswati’s view of climbing atop chariots and touching the Lord as ‘sin’.

Hindu pundits from different ‘matts’ and sects also supported the Puri seer and opined that climbing the chariots was against Hindu religion as well as scriptures.

The issue was discussed in detail as ‘Daitapati’ priests, who play a significant role during the Rath Yatra, opposed Shankaracharya’s view.

The priests claim that the devotees should not be prevented from climbing the chariots and touch the Lord because the tradition is being followed since generations.

Rejecting Daitapati’s argument, the Puri King said that the practice of attaching ladder to the chariots was introduced only in 2006.

Asking the state government to implement Shankaracharya’s decision in toto, Gajapati king also pointed out that the devotees need to be controlled in view of the security besides religious restrictions.

“It is high time, the government must take a decision and stop the practise of allowing people to climb the chariots and touching the Lord,” Deb said.