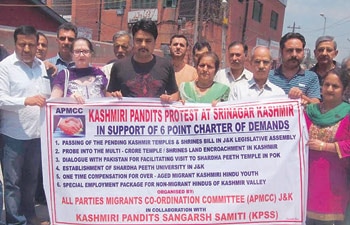 Kashmiri Pandits on Wednesday staged a protest at Srinagar’s Lal Chowk and threatened to launch fast-unto-death sit-ins if the Kashmir Temples and Shrines Bill was not passed in the J&K Assembly. The Bill is pending for the past five years.

Apart from the Temples and Shrines Bill, Kashmiri Pandits asked the state government to investigate the multi-crore temple land encroachment in Kashmir, initiate dialogue with Pakistan for facilitating visit to Shardha Peeth temple in Pakistan-occupied Kashmir, establish Shardha Peeth University in J&K, one-time compensation for the over-aged unemployed Kashmiri Hindus and a special employment package for Kashmiri Pandits living in the Valley.

Kashmiri Pandit Sangarsh Samiti (KPSS), an organisation consisting of the community based in the Valley, and other such organisations called upon the Centre and the state government to fulfil their demands by August 17. “Both the Central and state governments must understand the gravity of the situation and should take immediate steps,” KPSS chairman Sanjay Tickoo said on Wednesday.

In 2009, the Kashmir Temples and Shrines Bill was introduced in the Assembly. In 2013, the Bill was referred to the Select Committee headed by Law and Parliamentary Affairs Minister Saifullah Mir, who then submitted the Committee’s report in the Assembly.

In March this year, the Congress and the BJP joined hands in the Legislative Assembly and blocked the passage of the Bill, claiming that it would divide the Hindus of the state.

The KPSS has been seeking enactment of the Bill on the lines of the AQAF board and the Gurdwara Parbandhak Committee which manages the Muslim religious places and gurdwaras, respectively.