Caravan of jihadists coming from Afghanistan to liberate Kashmir : Al-Qaida

Caravan of jihadists coming from Afghanistan to liberate Kashmir : Al-Qaida 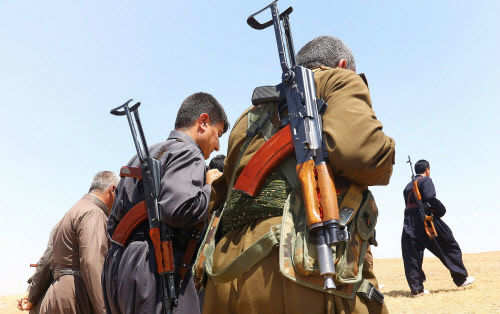 London : A chilling new video from the al-Qaida has asked Muslims in Kashmir to emulate “brothers” in Syria and Iraq and wage a violent jihad against India.

The video, which includes a statement read by Maulana Asim Umar, a senior leader of al-Qaida’s Pakistan cell will definitely have India’s security officers worried.

The video promises a “caravan of jihadists coming from Afghanistan to liberate Kashmir”.

The video, titled, “The War Continues: A Statement on Kashmir’s Muslims,” features an audio sermon by Umar.

The video runs footages dating back to 2010 of protests on the roads of Srinagar in which civilians were killed during a standoff with India’s security forces.

Interestingly, the video addresses Muslims on both sides of the line of control — both on the Indian and Pakistani side as well as to the broader Muslim populations of both countries.

In the video, Kashmiri Muslims are urged to join the global jihadi movement.

It says “Now Muslims all over the world have picked up arms, are marching in the field of jihad. Even those who rejected armed jihad are now joining this path after being disillusioned with democratic ways of peaceful protests”.

The video mentions Afghanistan, Syria, Iraq, Algeria and other parts of the world where Islamic extremism has been rife.

The video also calls for attacks in Europe and for a repeat of the Lee Rigby incident in London last year. The soldier was almost beheaded by two men of Nigerian origin in broad daylight outside a military barrack.

The footage cites Afghanistan, Syria and Iraq as inspiration for Muslims in Kashmir.

UK has long warned that jihadi fighters connected to the al-Qaida were replacing genuine opposition fighters in Syria, putting the whole world at risk.

Russia informed UK that the dangerous group fighting in Syria in the name of rebels is the Jabhat al-Nusra, which has direct links to the al-Qaida.

International observers fear that Syria has become the biggest training ground for jihadis instead of Pakistan as Islamist sympathists can experience combat training without any official scrutiny.

The fresh video cites “new Afghanistan being created in Syria” as inspiration and is the first to specifically target Kashmir.