TIRUNELVELI (Tamil Nadu): A 38-year old Hindu Munnani leader was murdered during wee hours on Saturday in front of his house at Sankarankoil near here by three unidentified men, triggering tension in the area, police said.

Jeevaraj was a former town secretary of the right-wing organization, they said, adding the incident occurred when he was having a chat with a few others in front of his house at Pattathur past midnight.

Police said investigation revealed that the three persons used chilli powder so that Jeevaraj could not escape from there before they attacked him with sickles. He suffered cuts on the head and shoulder and died on the spot.

This is the second murder of Hindu Munnani functionary since last month after Tiruvallur district president Suresh succumbed to injuries on June 19 a day after he was attacked at suburban Ambattur.

State government has set up a special investigation division into murders of several BJP and Hindu outfit leaders, including state Hindu Munnani secretary S Vellaiyappan and BJP functionary auditor Ramesh, in the past few years in the state after the party raised the issue. 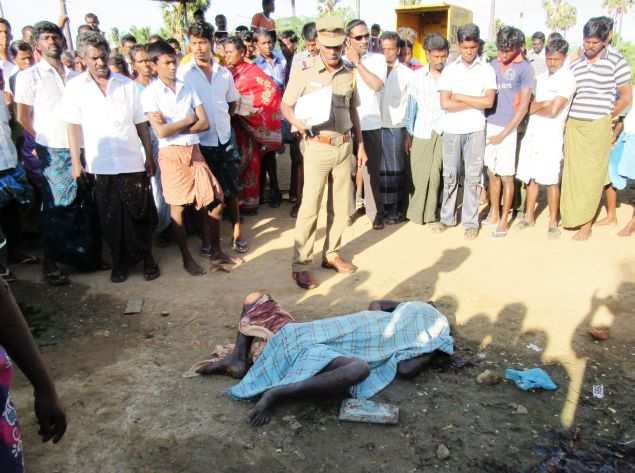 A policemen and crowd stands near the body of Jeevaraj. (TOI photo by K Antony Xavier)

A large number of Hindu Munnani volunteers gathered in front of Jeevaraj’s house.

Armed policemen had been deployed in the town to monitor the situation, Police said.

Investigation is on into multiple angles, one whether it was due to a domestic issue, as Jeevaraj has two wives and business angle, since he is involved in real estate.

Police said a case had been registered and steps are being taken to nab the culprits.